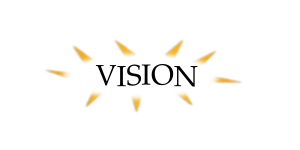 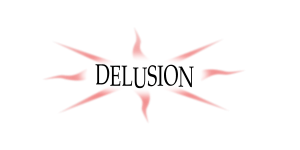 What are the Gates of Memphis? 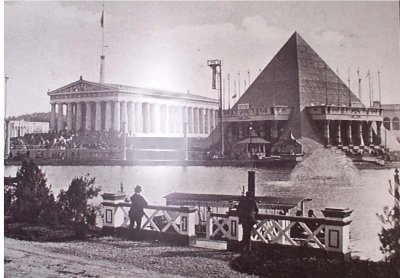 The Gates of Memphis are monuments that will ring the city of Memphis. To visitors and newcomers and passersthrough, they will announce, "this is a land of Giants". To citizens, they will remind, "Giants have walked here; follow them."

There will not be a single style of architecture, but the overall effect will be classic neon Las Vegas (the better to see us with, especially at night), Route 66 roadside architecture, monumental scale and Memphis cultural imagery. They will be many stories high and visible from miles away as you enter the city by car, plane, or train. They can have functions other than visual, but those functions cannot dilute their visual impact.

Now you know why I put "Delusions" in the subtitle.

Yet we already have one of the Gates half-realized -- the Pyramid. Half-realized. The problem with the Pyramid is that we let banality infect a great idea (based on the pyramid, pictured, that Memphis built for Tennessee's 1896 Centennial Exhibition). We turned a monumental idea into a pointy suburban office park. Still, the mythic structure is there.

posted by gatesofmemphis at 10:54 PM

So, I'm up here in the northern midwest trying desperately to learn a little bit about the city that will become my home next June. It's not easy...the chamber of commerce type sites are dull and very pollyanna, the relocation message boards are run by the angel of death (basically telling the reader, "don't come, get a divorce now and stay where you are...or go anyplace, ANYPLACE else!")

Via some Cooper Young website I stumbled upon your blog and a couple others and finally I feel like I'm seeing Memphis...before I actually get to SEE Memphis.

I think it's gonna be ok.

nkit, thanks for reading and commenting. And welcome, in advance, to Memphis.

Memphis is a cool city. It has its problems and occasional setbacks, but it is a good, interesting and fun city, a much better city than when I was a kid.

I recommend you check out the links on my sidebar to get a taste of some of the creative stuff going on in Memphis. By no means an encyclopaedic listing, but stuff I put up there as I find out about them.

It will be at least okay and probably a lot better than that.

btw, what Cooper Young website are you talking about, if you don't mind my asking?

www.cooper-young.com, which linked me to The Lamplighter website. It's an old (maybe "only") pdf of a community style newsletter. The area seems like a positive place, interesting people and businesses with a sense of community. I could get into that.

Michael, I sit corrected. And I have corrected the post.

Not picky at all. Who wants a Gate on Stage? Not me.

I think if you are happy now then you can be happy in Memphis too. Memphis is a place to put down. I've noticed that. There is a lot of crime, but most of it is confined to certain parts of the city. I'm 48 and I grew up here. I read and write about the city a lot. It's no worse than any other big city I've seen and the people, on the whole, are friendlier than they are in most places.

EVERYTHING in Memphis is half finished.

Memphis needs to recall it's Mayor and then vote in one that will quit worrying about his ego and concentrate totally on the creation of jobs. I have lived in other cities where there is theft but when people risk their lives to steal copper from powered up, live wires, something is desperately wrong.

Ok I know this too has happened in other cities, but the biggest difference with Memphis is that it has the potential and is being ignored. I have at least two people come up to me each day and ask if they can help or get some work and they mean it. I put them to work for a few days just to give them some desperately needed cash and to make sure they are just not buying drugs. Most are very nice people just desperate and willing to work.

When people ask for work, the solution is JOBS. You don't need a new school system to tell you it is JOBS. The school system will happen with the right structure and people but if you put the parents to work, most likely there will be a multiplier effect where the wife and children will gain some benefit. If nothing else at least the liquor stores will gain and then spend that money.

Recall H or get him focussed on jobs and things will happen.

I fully agree that Memphis has so much potential. I have spent almost three years here and have really tried to take in the city. There are so many architectural gems in this city. I don't know how the city would ever pay for some of the restoration needed throughout the city. I am from Nashville and will soon be returning to complete my graduate education. Nashville is a great example of how a city can push into the future while at the same time preserving it's past. Memphis needs JOBS, other than Fedex, there is nothing else here of any significance. Unfortunately, I believe one day Memphis will get rocked by a massive earthquake, massive chaos will ensue, and the majority of the city will lay in ruin. It will then resemble New Orleans (population still hasn't recovered). I wish Memphis the best, however I can't wait too return to Nashville. I like many other people feel like Memphis is like living on another planet!

To whomever writes this blog- you have a way with words! Memphis may seem like a hateful city to the rest of the world (thanks, media!) but I'm proud to live here. I've live around the world thanks to the USMC and I can truthfully say this is the only place where people smile at complete strangers on the street. Good job w/ the blog!

Acooljob middot Careers If you. I think Desjardins has the lowest at $1.

My family, my ENTIRE family started in Memphis back in the 1820's. Our family has always looked to Memphis with pride and those of us, like myself, that moved away over the years tried to get back as often as possible. That all changed about 10 years ago. The city just seemed to get worse and worse, and yes, it's pretty obvious that it was and likely still is, the political system. Aside from that, it appears that no one who was born and raised there, or has been there more than 10 or 15 years cares to make Memphis a HOME or place of pride. There are great and interesting people still there, but I do not feel the city as a whole represents that anymore. Very sad, because I always said that I would move back someday, but it appears the place I committed to move back to is no longer there.